Capital Gains Tax (CGT) can seem complicated for property investors, especially when considering the implications of property depreciation and when a CGT exemption is available. There are huge benefits available to investors who claim depreciation on plant & equipment and capital works deductions on a property which will be sold, especially when the 50 per cent CGT exemption is activated.

A CGT event takes place when assets are sold. It applies to assets that have been acquired or have had capital improvements since CGT came into effect (20th of September 1985), unless otherwise exempt.

When a property is sold it will usually make a capital gain therefore triggering a CGT event. Once exemptions have been applied, the gain will be included in the taxpayer’s assessable income for that year. A capital loss does not reduce a taxpayer’s assessable income; instead, taxpayers are able to offset the loss against a capital gain in the current or future financial years. A company will pay the company tax rate (currently 30 per cent)  for capital gains.

How to calculate CGT for a property:

Depreciating plant and equipment (or Division 40) deductions are available on mechanical and easily removable assets within a property. When a property is sold a gain or loss is calculated separately for these items. Where applicable, capital proceeds can be distributed between the property and depreciating assets to determine a separate tax consequence.

Capital works (or division 43) deductions are available on the structure of the building, including items that cannot easily be removed such as windows, tiles and electrical cabling. Capital works deductions will reduce the cost base, adding to the capital gain. This in turn will increase the amount of CGT applicable.

During the full term of ownership, the capital works and plant and equipment depreciation available will be claimed as a deduction at the investor’s marginal tax rate. These deductions will reduce tax liabilities therefore generating additional cash savings each year.

The following example shows two scenarios and the different outcomes should there be a CGT event before or after twelve months of ownership. 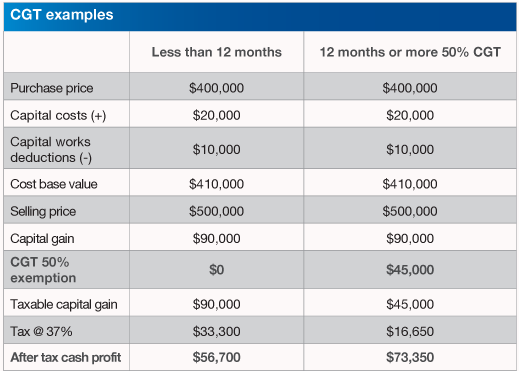 Claiming these deductions ensures that a property investor takes advantage of the added cash flow throughout ownership, especially when the property is held for more than twelve months activating the CGT 50 per cent exemption. That aside, having access to the extra cash flow during ownership makes financial sense due to the change in value of money over time. This also provides an opportunity for the property owner to invest the extra money or reduce loan liabilities.

CGT will vary based on each scenario. When considering the sale of an investment property, BMT Tax Depreciation strongly recommends talking to an Accountant about the implications of CGT and the exemptions available. Other CGT exemptions may include the principal place of residence (PPOR) exemption, the six year exemption rule and the six month exemption rule.

In this issue:
Claim more from older properties

Don't get into hot water with claims

Technical
Don't get into hot water with claims