The Australian energy industry is in a state of transformation. Innovative technologies have presented alternative power generation opportunities, old operations like Liddell power plant are approaching closure and new development applications such as the Adani Carmichael coal mine have been approved.

As the industry changes, the cost of electricity remains high for consumers. A review by the Australian Competition and Consumer Commission (ACCC) last year found a lack of competition in the energy sector, stating that more needed to be done to lower bills for consumers.

The Federal Government has been promising to neutralise the market with a “big stick” energy policy. The ultimate goal is to combat anti-competitive behaviour and bring down prices. It would also enable the government to force divestment of energy company assets and compel companies to supply electricity at a fixed rate for up to three years. The cornerstone energy policy failed to gain momentum during the 2019 federal election campaign, with the Liberal Party reintroducing it last month.

Key mining industry players have noted that policy uncertainty has discouraged investment in the necessary assets to modernise operations and lower the cost of electricity. ACCC chairman Rod Sims, as quoted in The Australian, also noted that ‘household electricity bills have increased by 50 per cent in the past decade and this has sparked a debate on the mix of generation in the electricity sector and the need for more investment.’

While the policy debate continues, energy companies should consider ways to boost cash flow and reinvest in necessary assets and operations. Depreciation is one aspect of taxation that facilitates greater investment and could potentially lower costs in the long-term.

Depreciation refers to the natural wear and tear that occurs to a building and its assets over time. The Australian Taxation Office (ATO) allows this wear and tear to be claimed as a deduction.

Mining companies can use either the prime cost or diminishing value method to work out the decline in value for all equipment and structures. Under the prime cost method, the deduction for each year is calculated as a percentage of the cost.

There are also specific rules for depreciating mining exploration. Eligible depreciating assets used for exploration or prospecting for minerals or quarry materials are 100 per cent deductible in the year in which you start to use them.

An immediate deduction may also be available for capital expenditure that doesn’t form part of the cost of a depreciating asset but is incurred on mining exploration or the rehabilitation of your mining or quarrying sites.

Eligible commercial investors and tenants are also able to recalculate the effective life of mining equipment if there are changed circumstances. According to the ATO, examples of circumstances that could cause a variation include:

Let’s look at an example. A mining company organised to have a tax depreciation schedule prepared for its mine site. To operate successfully, the company uses assets like magnetic separators, conveyors, underground haulage trucks and dozers, all of which have significant depreciable value.

The table below outlines 10 plant and equipment assets found on site and their original value at the time of purchase. It also highlights the first year and cumulative five year depreciation deductions available. 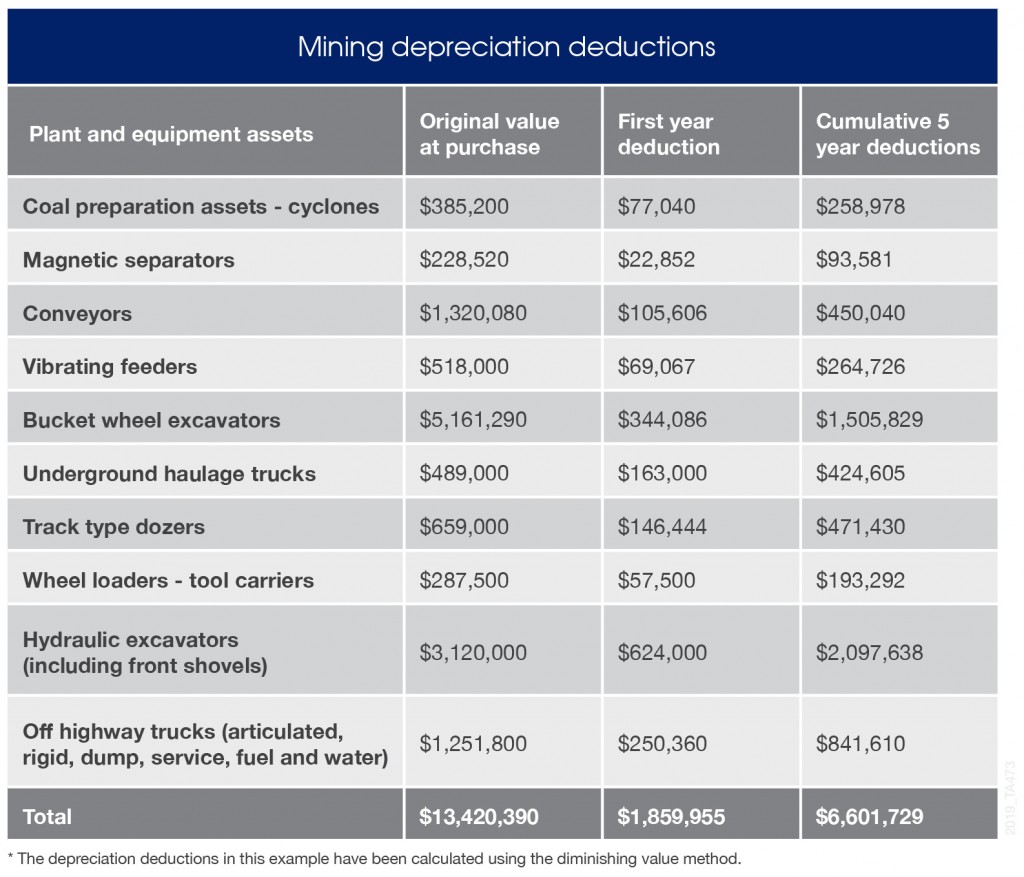 As the table shows, the 10 plant and equipment assets assessed entitle the company to claim $1,859,955 in the first financial year alone. In the cumulative five years, this figure rises to more than $6,601,729.

Given that the mining operation would have several other assessable items, it’s likely that the company would be entitled to millions of dollars more. The millions of dollars saved through depreciation can be used to invest in new mining equipment, to pay for outstanding business costs or even to expand operations.

To find out more about depreciation for commercial property, Request a Quote or contact our expert staff on 1300 728 726.