How recent changes to depreciation legislation will impact investors

These proposed changes were passed by the Senate on the 15th of November 2017.

Shortly after these changes were proposed and following their legislation, a number of property investors contacted BMT Tax Depreciation to discuss how they might be affected.

Understandably so, as the last major changes to depreciation legislation were made by the government in the mid 1980’s.

The good news for investors is that properties purchased prior to 7:30pm on the 9th of May 2017 are unaffected, as the previously existing depreciation legislation has been grandfathered.

This means that any investor who exchanged contracts prior to this date can continue to claim depreciation deductions as per before.

The changes outlined in legislation section two of Treasury Laws Amendment (Housing Tax Integrity) Bill 2017 remove a subsequent owner’s ability to claim a depreciation deduction for previously used plant and equipment assets (the easily removable or mechanical fixtures and fittings) in properties which exchanged contracts after the 9th of May 2017.

The legislation also confirms that the proposed changes will only apply to second-hand residential properties.

Any investor who purchases a brand new property can continue to claim depreciation for plant and equipment as normal.

The changes won’t affect an investor’s ability to claim the capital works component (deductions available for the wear and tear of the building structure and fixed items).

Depreciation of plant and equipment for non-residential/commercial properties is also unaffected.

The legislation also states that amendments to deductions for plant and equipment assets held in residential properties will not affect those carrying on a business, corporate tax entities, superannuation plans (other than Self-Managed Super Funds) and those who hold a property in a large unit trust.

Properties which have been lived in and turned into an investment property by their owners prior to the 1st of July 2017 are not affected. Owners can continue to claim plant and equipment depreciation and capital works deductions.

There are scenarios where the values of plant and equipment will be needed. This includes when an asset is scrapped, where there is a partial or full CGT exemption and where the exchange date and settlement date on the sale of the property occur in separate financial years. Depending on the circumstances, a property investor who is unable to claim depreciation on previously used plant and equipment assets due to these amendments should be able to claim a capital loss for the decline in value of the plant and equipment assets. This capital loss should only be able to offset a capital gain and if needed can be carried forward to offset future capital gains. 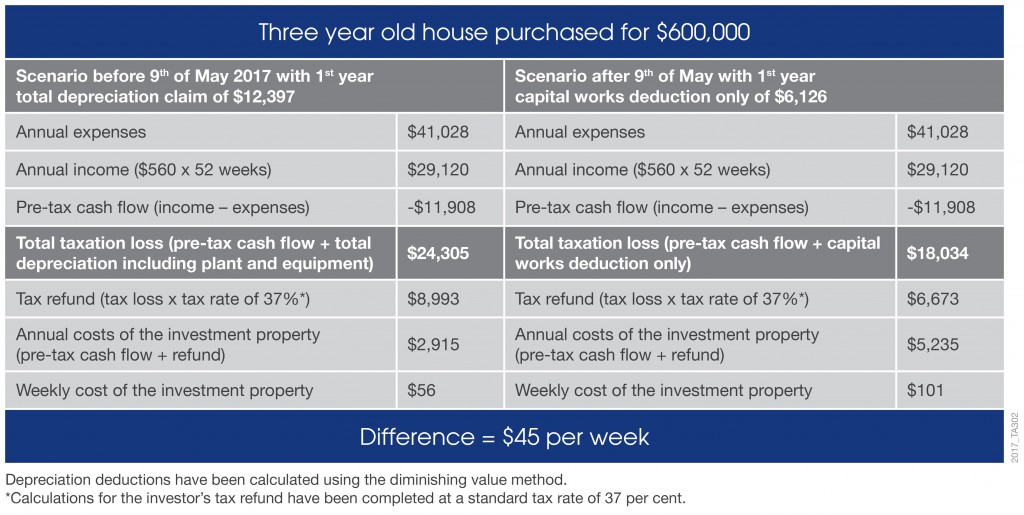 In the first scenario, the owner is able to claim a total depreciation claim of $12,397 from both capital works deductions and plant and equipment depreciation.

While we believe that generally the integrity measure has merit, the legislative changes go much further than what was necessary to deliver on the government’s intention of stopping subsequent owners from claiming deductions in excess of an asset’s value. The approach outlined in the legislation treats residential property investors differently by extinguishing a property investor’s ability to claim a deductions based upon a transaction.

It’s more important than ever to work with a specialist Quantity Surveyor to ensure that all deductions are identified and claimed correctly under the new legislation.

Each and every BMT Tax Depreciation Schedule will be tailored to suit an individual’s property investment scenario, ensuring that all deductions are maximised.

About the author
BMT is a Quantity Surveying company who specialise in tax depreciation with a personalised approach to every tax depreciation schedule prepared for investment, commercial and rental properties.
Social share
31 Comments