Population records broken all over Australia

While we were all tucking in to our Christmas ham, the latest series of population data was released by the Australian Bureau of Statistics (ABS) revealing a few new records broken by Victoria, Western Australia, South Australia, Northern Territory and New South Wales.

Of the 78,600 total population increase for the quarter, an all-time record 47,247 came from natural increase (births minus deaths). The 86,700 births during the June quarter well and truly exceeds the previous record of 78,100 in the March 2012 quarter.

The mixed fortunes at a state-by-state level are indicative of the recent performance of capital city property markets. Victoria’s population is breaking all sorts of record highs while, on the other hand, Western Australia appears to be falling in a hole deeper than the Grand Canyon; both South Australia and Northern Territory have set new interstate migration records for the wrong reasons.

After more than a decade of nation-leading population growth, Western Australia’s 1.05 per cent growth for the year ending June 2016 is well below the national average of 1.42 per cent. Forty three consecutive quarters of positive growth of interstate migration during the boom years has been followed by nine straight quarters negative growth. The 2,805 people that migrated away from Western Australia in the June 2016 quarter is an all-time record and the 996 net increase in overseas migration during the quarter pales in to insignificance when compared to the 13,165 comparative figure from four years earlier.

This concerning population trend in Western Australia is a dampener for housing demand at a time when Perth has been producing record volumes of new homes.

It is absolutely no coincidence that Western Australia’s population shift follows the path of falling iron ore prices. As shown in this graphic, the parallel of these two metrics is incredible. Western Australia has a lot going for it, however its economy is the least diversified of all Australian states. It needs to (quickly) develop other sectors of its economy. Namely, tourism, agriculture, and the international student market. 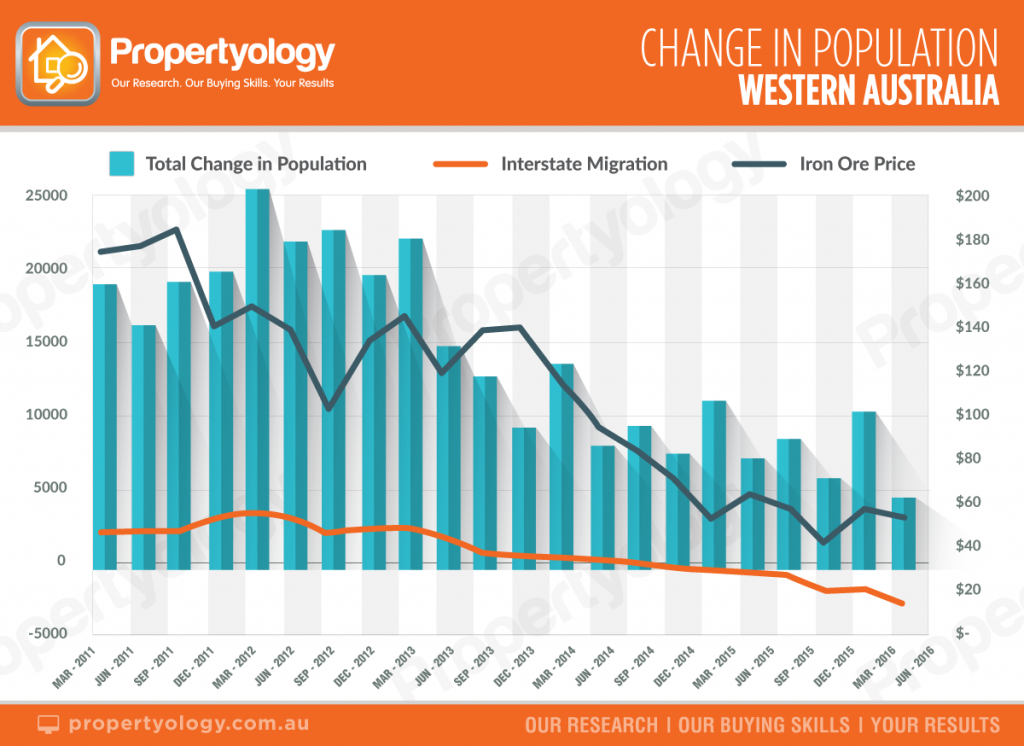 The biggest success story from population data continues to be Victoria. The 123,131 total population increase for the year to June 2016 surpassed the record previously held by Queensland (115,561 in 2008). 65,007 (53 per cent) was from overseas migration. Victoria’s total population growth last year is comparable in size to the total population of Australia’s nineteenth biggest city, Mackay.

Victoria’s records don’t stop there. The 14,903 natural increase for the June quarter is a state record as is the 4,947 quarterly increase in interstate migration. It’s now been three consecutive quarters that interstate migration in Victoria has been more than 4,000 (last achieved way back in 1995).

While we know that Victoria’s construction industry has had no problem building enough dwellings to cater for the demand, the biggest challenge will be whether the state can continue to create enough jobs. It may be a couple of years before we all know the full impact on Melbourne’s economy from car manufacturing closures.

New South Wales’s population grew by 105,585 over the year to June 2016 and is on track for a fourth consecutive year of 100,000 plus increases – a feat never achieved before in Australian history. The state continues to be the main arrival point for internationals with the net increase in overseas migration for the year being 71,161. While the state’s economy remains incredibly strong, lack of housing affordability would be the primary cause for 11,349 people relocating interstate during the year ending June 2016. 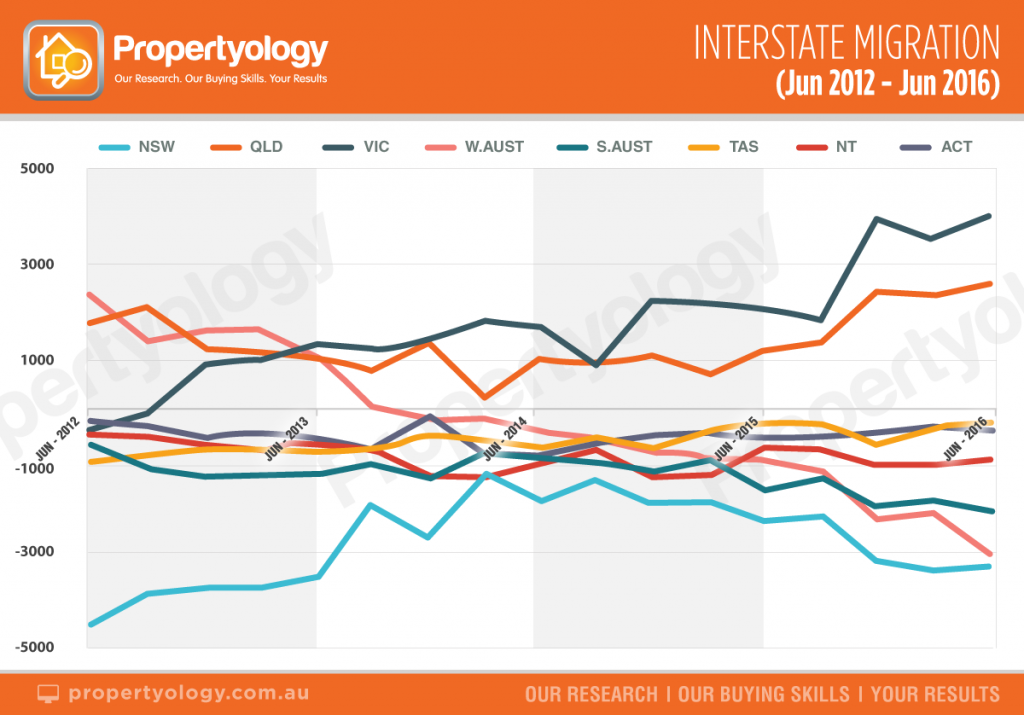 Queensland’s population growth rate of 1.35 per cent for the year ending June 2016 was just behind New South Wales. The 4,844,473 population spread across the sunshine state is comparable to the population crammed in to greater-Sydney.

We may be seeing the beginning of a new trend with Queensland’s population. The 3,328 quarterly increase in interstate migration is its highest since December 2008. The June quarter marked three consecutive periods of interstate migration of more than 3,000. A rebound in coal prices will make it easier for job creation to attract more people across the border but, if Brisbane’s property market is to fully awaken from its slumber, funding initiatives for new infrastructure is what is really needed.

South Australia’s population growth rate of 0.1 per cent for the June quarter was the lowest in Australia. Negative growth in interstate migration of 1,873 is the state’s worst performance in over twenty years.

Things are really grinding to a halt in Northern Territory with a total increase in population over the year of a mere 534 people. It’s now been twenty seven consecutive quarters since the top end produced a positive interstate migration figure.

Improved economic conditions are behind Tasmania’s sustained population rebound. The state has produced positive growth in interstate migration in four of the last five quarters (a stark difference to the previous sixteen consecutive quarters of negative growth).

Canberra’s population growth rate of 1.29 per cent for the last year continues to closely follow the national trend. The June 2016 quarter produced the highest natural increase (births / deaths) dating back to the start of ABS in 1981. 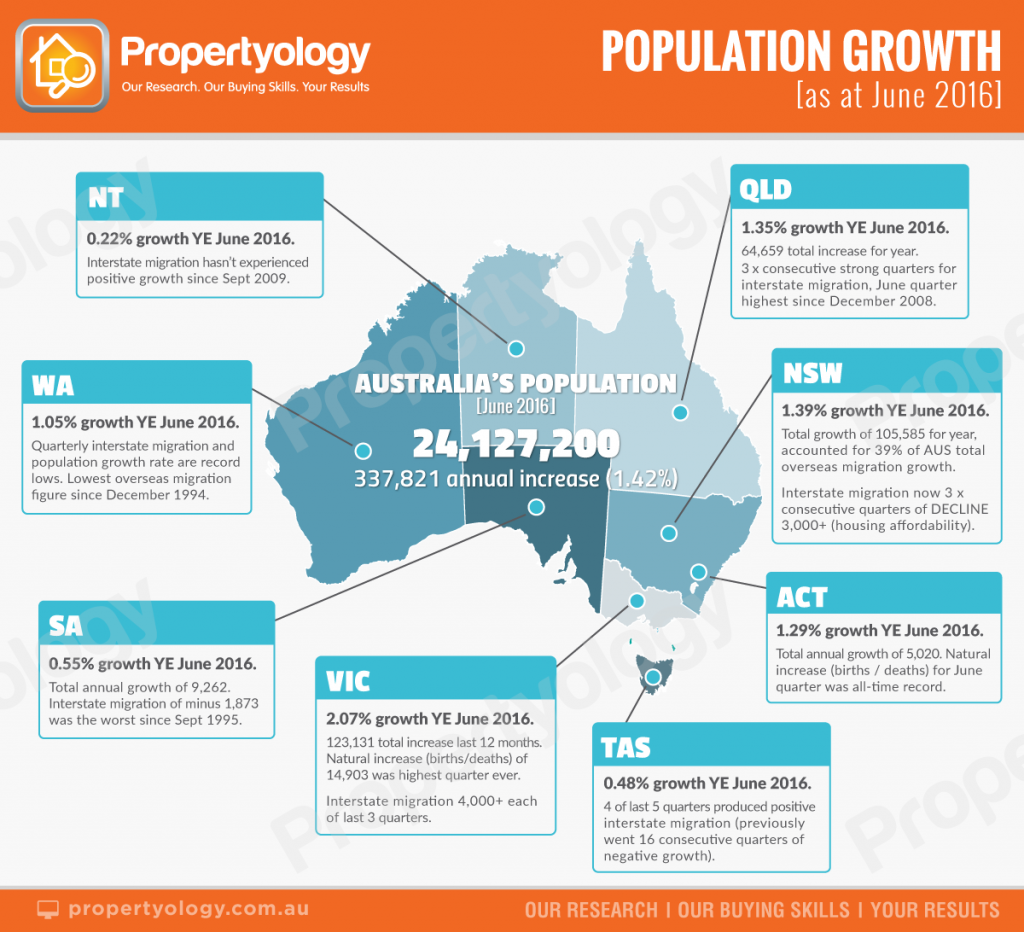