The property markets of ten out of the thirteen local government authorities (LGAs) which make up the New South Wales’ region of Northern Inland are ranked in Australia’s Top 30 per cent of property markets over the last fifteen years.

Gunnedah and Liverpool Plains were the equal best performing markets in the region with a national ranking of 38th out of the 550 LGA’s in Australia.

Liverpool Plains’ median house price increased by an average of 7.9 per cent per annum and its average rental yield is 7.5 per cent. 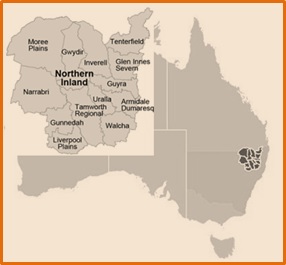 Propertyology conducted a study to compare the historical property market performance of each of Australia’s 550 local government authorities between 2000 and 2014. Given that some property markets have higher rates of growth and others have higher rental yields, Propertyology calculated the ‘total return’ (average annual growth rate plus rental yield) and we then ranked the LGA’s from 1 to 550 based on this performance.

Tamworth had the highest population growth rate in the region – 1.1 per cent per annum for the last ten years compared to the 1.6 per cent national average. With a population in excess of 60,000 people, Propertyology regards Tamworth as an exceptionally strong regional service centre with an economy which is comparable to capital cities in regards to industry diversity. Tamworth’s property market was equal 163rd (with Uralla), making it amongst the best 30 per cent based on overall historical performance for the last fifteen years.

Propertyology’s study concluded that population growth doesn’t have the big influence on overall return as many think. The historical evidence shows numerous locations performed strongly in spite of modest, or even no, population growth. For example, Moree Plains’ population declined by an average of 0.6 per cent per annum and both Narrabri and Liverpool Plains had zero population growth, yet they all performed better than each of the 43 LGA’s in Greater-Sydney. Affordability and lifestyle are the common denominators.

The Northern Inland region contains locations which tick a lot the boxes that Propertyology looks for when helping mum-and-dad investors to take advantage of the many opportunities that Australian property markets have to offer.