There’s an interesting relationship unfolding between the supply and demand of property markets in Australia’s biggest cities.

I use the term ‘relationship’ loosely because what I’m referring to is about as scientific as that (un) reality TV show, The Bachelor. As we’ve seen over and over (make that ‘my wife has seen’ – I don’t watch the show), simply placing an attractive man and an attractive woman in a romantic hideaway is absolutely no guarantee that they’ll be compatible.

It’s not that dissimilar in Australian property markets at the moment. It seems that developers and city councils are concocting their own version of The Bachelor. The plot goes something like this ‘… our population is growing, they all need to live somewhere, we’ll whack up as many high rises as we can, they’ll buy whatever we build.”

They’ll all live happily ever after. Apparently!

In Propertyology’s opinion, the enormous increase in the ratio of apartments to total new dwellings built in Melbourne, Canberra, Brisbane, and Darwin raises a big question mark over how these values might perform over the next decade.

It’s one thing to question whether the total volume of new dwelling supply is equal to, above or below what is required to accommodate the increased population in different locations. It’s a completely different thing to evaluate whether what has been built is what the public actually want.

There will always be an emotional connection between human beings, the style of dwelling that each household desires, and which part of town they want to live in.

Developers don’t determine that, buyers do!

According to official data, roughly 50 per cent of capital city households are families with children and, if anything, the average number of people living within each household is increasing. But for some inexplicable reason, the proportion of apartments to detached dwellings is increasing from three out of ten to almost one for one; in some cases, even higher.

There’s no question that demand for apartments in Australia’s biggest cities is increasing however, the rate of apartment construction is occurring far too fast to be tested by those who they are being built for – the Australian public.

For generations subsequent to the arrival of the First Fleet at Botany Bay in 1788, detached houses were the only style of dwelling built. Fast forward to 2016 (the last Census) and 43 per cent of Greater-Sydney’s 1,855,734 total dwelling stock were apartments and townhouses. And since the 2000 Sydney Olympic Games, six and a half out of every ten new dwellings approved were apartments. Evolution!

Five consecutive years of record volumes of new (overall) supply may very well result in Sydney dwelling prices declining over these next couple of years. However, at least public demand for apartment living has been well and truly tested. 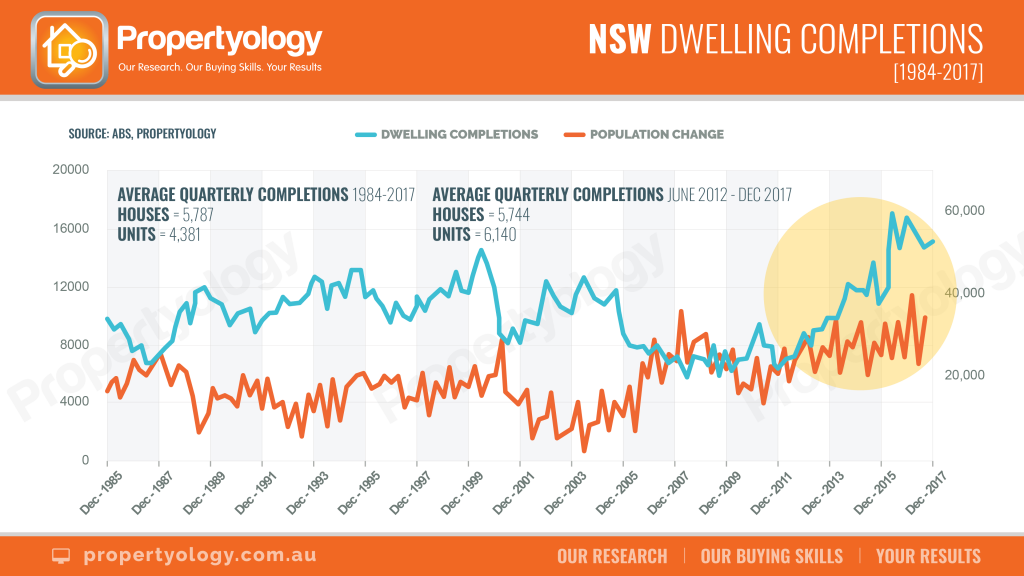 Melbourne is a completely different story. The 2016 Census confirmed that 32 per cent of Greater-Melbourne’s total dwelling stock of 1,832,043 were apartments and townhouses. That’s quickly changing with the volume of apartments constructed over the last five years being three times higher than the long-range average.

We already know about Melbourne’s population growth being phenomenal. We also know that supply of new dwellings has been at record high volumes for several years.

But it seems that Melbourne developers and city councils have just rushed in and decided that they’ll marry the two together by assuming everyone has the same personality.

In other words, for every ten dwellings completed, only 2.7 were apartments.

From June 2012 to December 2017 (the largest residential construction boom in Australian history), the total quarterly volume of dwellings completed in Victoria increased significantly to 14,203. Detached houses represented 7,880 (much the same as the 33-year average) while 6,323 were apartments.

For every new house built in Melbourne there’s now just shy of one new apartment built as well. 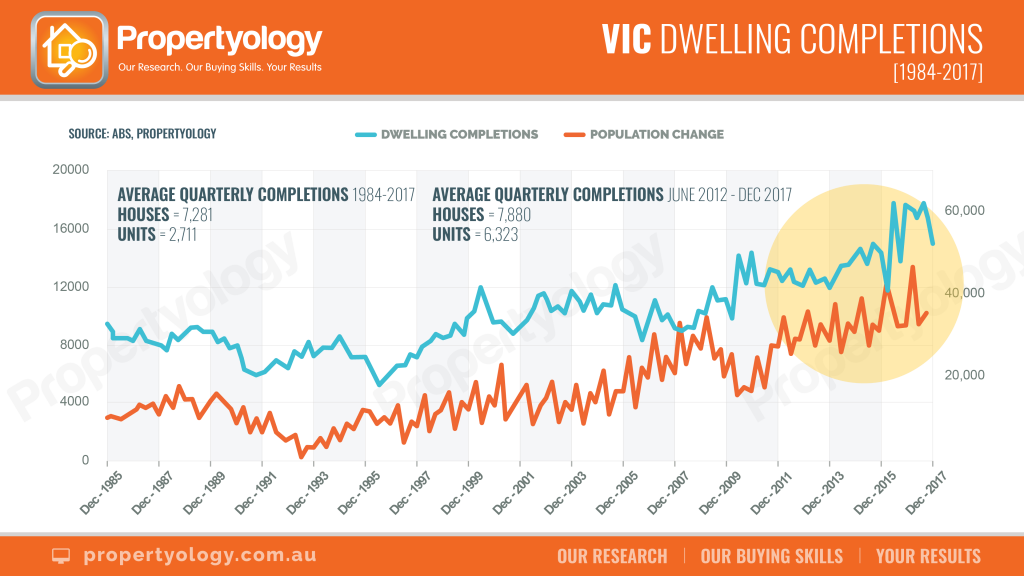 The courting period for Melbourne’s growing population and the style of digs that they prefer to live in has not been long enough.

While it’s clear that the property sector has a love affair with building apartments, the odds of a perfect match with the public is as scientific as The Bachelor.

In contrast, Sydney dwelling completions during the five year residential construction boom produced a ratio of apartments to houses of slightly more than one (51.7 per cent). But the important difference is that Sydney is an extremely mature apartment market. Its relationship has been tested whereas Melbourne’s hasn’t.

Melbourne’s median dwelling values have been consistently declining since January 2018; the large volume of supply of total dwellings has certainly played a part in this. But it’s the sudden structural change in dwelling style that Propertyology questions.

68 per cent of new dwellings completed in Canberra over the last five years were apartments and townhouses. And there’s more in the pipeline with 78 per cent of dwelling approvals over the last three years being for attached dwellings. That’s quite a step up from the 48 per cent three decade average.

At the other end of the spectrum, only 15 per cent of Hobart’s dwellings are apartments and townhouses.

Sure, apartments provide an affordable option for living closer to town. But suggesting that everyone wants to live in an apartment close to town is akin to only inviting six-foot tall brunettes on The Bachelor.

It’s foolish to expect that thousands of people will fork out $600,000 plus on one asset that they’re not happy with. Maybe they’ll continue to rent. Maybe they’ll completely relocate to a different city where they can get what they want.

As economies outside of Melbourne and Sydney continue to improve, it’s feasible that interstate migration to more affordable locations (including the long list of desirable locations that aren’t capital cities) will increase. As that happens, this apparent love affair between apartments and residents will be tested.

Only time will tell if it’s a match made in heaven or hell.