If we draw a line in the sand right now and cast our minds forward three years, of Australia’s eight capital city property markets my money is on Hobart being Australia’s best performer.

While other so-called experts were berating Tasmania’s basket-case economy, Propertyology gave Hobart our official green-light back in April 2014. The first property which we purchased was for my own portfolio and, over the following two years, we’ve purchased fifty odd properties for our clients.

Hobart and Tasmania in general had its share of economic challenges over recent years. The forestry industry completely closed in 2010, the were some mining-related job losses in the state’s north west, and a large percentage of students were dropping out of school after year ten.

For several years much was written about Tasmania’s high unemployment rate and below average population growth rate. Property investors, myself included, for quite a while simply put Hobart in the ‘don’t bother’ basket.

58 per cent of the state’s population actually live outside of the state’s capital city so it’s often not appropriate to paint Hobart with the broader Tasmanian brush. Hobart’s unemployment rates are often much better than the state average.

The reason Propertyology chose to focus our research energy on Hobart in the first place was because we believed that it had a mix of economic drivers with significant potential for prosperity at this juncture in the Asian Century.

The OECD has forecast that an estimated 2.5 billion extra Asian people will transition from poverty to the middle class between 2013 and 2030. That places enormous demand on many of the goods and services which Australians have always taken for granted. Education, food manufacturing and tourism are of premium quality in Hobart.

International tourism numbers have reached record levels for three consecutive years now, growing by 20 per cent to the year ending March 2016 compared to 8 per cent national growth. Plantation forestry has
re-emerged and is creating new jobs in manufacturing and transport.

Growth in retail trade figures has occurred for sixteen consecutive months. The ABS released a statement earlier this year saying that Tasmania’s economy is now growing at its fastest pace since 2010 and only NSW and Victoria were growing at a stronger rate.

The improvement in Tasmania’s economy coincided with the end of a sixteen year reign of the former state government in March 2014.

During 2014 and 2015, 9,000 extra jobs were created and interstate migration numbers have rebounded incredibly well. The correlation illustrated in this graph is fascinating. Of course, this directly increases demand for housing. And, unlike a majority of mainland capital cities, Hobart’s housing supply pipeline has been kept under control. 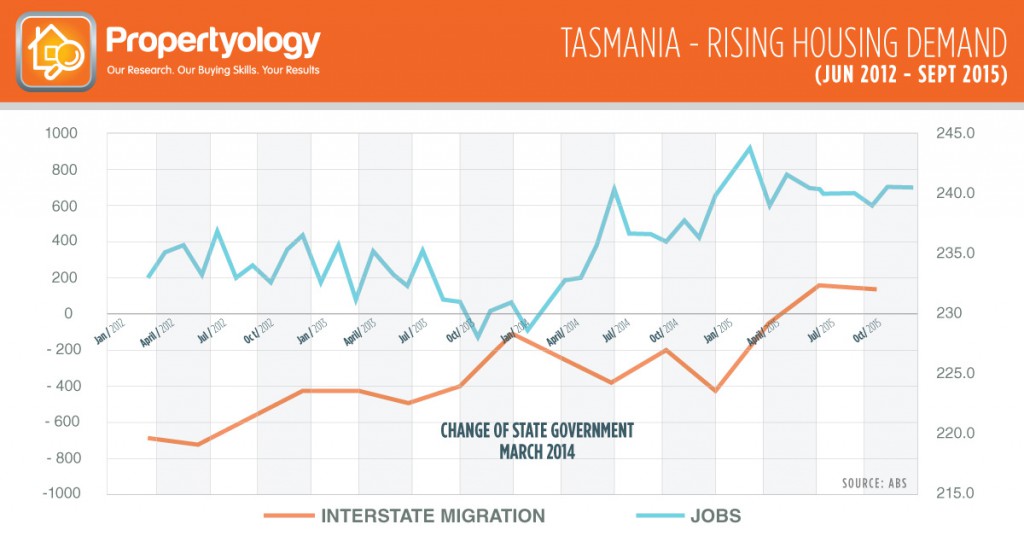 In our opinion, Hobart is currently the most improved property market in Australia by a long shot. Propertyology forecasts that Hobart will be Australia’s best performed market over the next few years. The good times are only just beginning for Tassie.

There’s a $600 million major upgrade of the Royal Hobart hospital currently under construction, development approval has recently been granted for seven (7) new hotels, and the state government has put the iconic Macquarie Point site out to tender for a Darling Harbour style precinct. 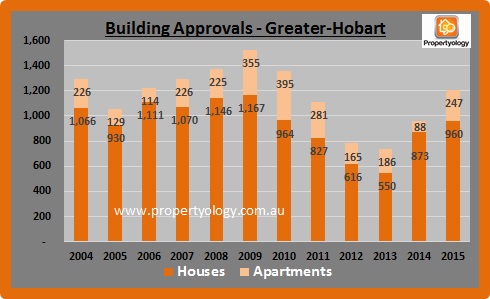 Vacancy rates in Hobart are currently the lowest of all capital cities and all of clients are enjoying rental yields of 5 per cent to 5.5 per cent.

Importantly, rates of new supply have been well controlled and the building approval pipeline indicates that this will continue for the foreseeable future.