Propertyology expects the Gold Coast market to surprise many pundits and become one of Australia’s best performers during 2015-2017. The storm clouds are gone, the sun is due to shine – and quite brightly. However, there is still some turbulence in the waters.

Tourism drives the Gold Coast’s economy. So, when the GFC hit in late-2008, consumer sentiment disappeared, jobs were shed and its property market suffered.

The Gold Coast’s only other industry of note is construction and a significant pre-GFC over-supply compounded things for its property market. In spite of having population growth (3.1% pa during 2003-2013) of almost double that of the national average (1.7%), the Gold Coast was the worst performing market in Australia for a few years. 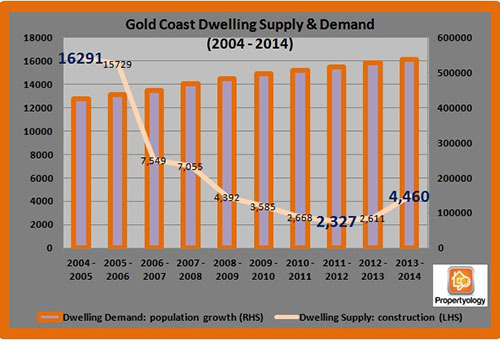 As the above graphic shows, building approvals declined considerably post-GFC and a lot of the surplus supply has now been soaked up. Vacancy rates have tightened. Sales volumes and property prices are already growing.

Consumer and business sentiment have improved over recent years. The new Gold Coast hospital plus a $1.8 billion passenger rail project have been good for jobs growth. Work has commenced on a $670 million expansion of Pacific Fair which will make it the largest shopping centre in Queensland. The $500 million athlete’s village for the 2018 Commonwealth Games and a $1 billion luxury hotel by Chinese developer, Ridong, are other major projects. 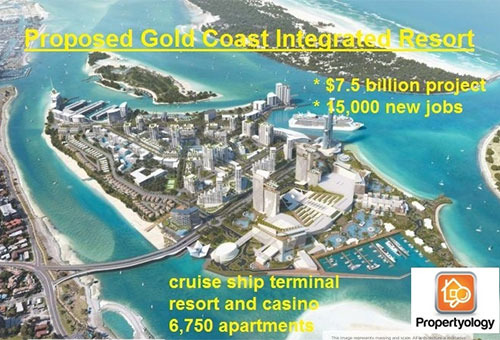 The tourism boom which Propertyology boldly predicted two years ago has arrived, meaning things will only get better for the Coast. A decision on a proposed $7 billion mega resort is due in early-2015. An economic impact statement released by the proponent in September 2014 suggests that, if completed, tourism revenue could increase from $1.15 billion per annum to $8.9 billion; 15,000 jobs could be created.

By the end of 2015, I believe the data will show Gold Coast to have been one of the strongest markets in Australia.

But don’t be fooled, leopards don’t change their spots! Gold Coast Mayor, Tom Tait, is a developer by trade and he is very pro construction. There have been a number of large building applications lodged during the last 12 months. Significant over-supply is expected again in a few years time. Areas with a high concentration of new supply will include Southport, Coomera and Labrador.