Focus on the fundamentals, not the name

How does the following scenario sound as an opportunity to invest in property with excellent investment fundamentals? Picture purchasing a detached house for $400,000 (well under the national average price of $475,000) achieving a rental yield of 6 per cent per annum. Also imagine that the property is in a location where population growth is in line with the national average, household income is well above the national average, and the average age of occupants is below the national average. Can you think of many locations with better credentials?

For the fifteen year period ending December 2014, the average annual change in median house values in this location was 6.5 per cent and, when combined with median yields of 6.4 per cent, the total return gives this location a ranking which puts it amongst Australia’s Top 40 per cent (209th out of 550 local government jurisdictions). In fact, the historical performance of this property market since the year 2000 was on par with Sunshine Coast and Ballarat, better than the highly desirable South Perth, equal to or better than twenty-nine of Melbourne’s thirty-one LGAs, and better than all of Sydney’s forty-three LGAs.

Keen to know where this location is?

The main industries supporting the economy of this location are tourism, agriculture, and the defence force. The outlook for these economies at this juncture in the Asian Century, where an unprecedented rise in the number of people about to enter the middle class beckons, is super exciting. It’s little wonder that the Australian Federal Government and lots of wealthy foreign investors are actively pursuing funding options for new infrastructure investment in the region.

With current rents all but covering the holding costs on an investment property in this location, just imagine the potential for future capital growth.

If this hasn’t got the motivated property investor licking their lips I don’t know what will!

World champion athletes Cadel Evans and Leisel Jones were born in this location is probably insufficient information for people to correctly guess the name of this location. Ok, I’ll cease with the suspense. The location that I have described is the Northern Territory regional town of Katherine.

Now, I bet your investment appetite has suddenly dissipated.

I have just created a real-life set of circumstances to illustrate that too few property investors have an ability to understand and remain focused on the important fundamentals that count most when selecting a location to invest in. The fundamentals described above are real; they are impressive. And if, when I revealed the name of this location, it was a suburb within a capital city I suspect this report would be promptly shared with so many family and friends that it would accelerate within Google’s search engine faster than one could say ‘hotspot’.

Instead of making decisions on investment fundamentals, almost all property investors will immediately be drawn to a map and their personal feelings upon receipt of the name of a location. Often without even realising it, the heart immediately over-rules the head and we begin to ask ourselves questions like ‘would we live there?’ Whether we personally would live in Katherine, Kingston or Kogarah is as subjective as selecting T-bone, trout, or tofu from the restaurant menu.

Katherine has developed in to the primary service centre for a total regional population of 24,000 and an area almost the size of Victoria. Essential social infrastructure is well established, including modern retail facilities, hospital, schooling, sports grounds, parks and gardens as well as several Commonwealth and Territory Government services.

RAAF Base Tindal, located adjacent to Katherine civilian airport, is significant for Australia’s air combat defence and fast jet base. The RAAF personnel and families contribute approximately 2,200 people to Katherine’s population and this is expected to increase with the potential of the Delamere Bombing Range and the Bradshaw Range.

The region is adventure territory, offering unique attractions such as Kakadu and Nitmiluk national parks, Katherine Gorge, ancient (indigenous) rock paintings, caves, fishing and camping experiences. Katherine is exceptionally popular for the ‘grey nomads’ (the fast growing number of baby boomers who enjoy long and affordable holidays while taking in the unique sights that Australia offers). 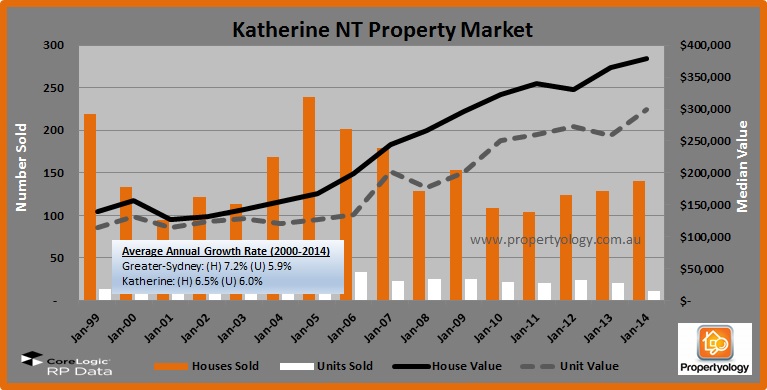 With approximately 300,000 visitors per year, the retail facilities of Katherine are more than adequate.

Plentiful water supply and vast open planes makes this prime agricultural land. The environment consists of a warm, tropical climate, spectacular gorges and rainforests, and heavy monsoonal rains in summer. Flash flooding from the Katherine River can occur although it is quite sheltered from the potentially destructive cyclonic winds.