Could solar farms be the nation’s preferred future energy source?

People across the globe are becoming more aware of the environmental impacts of fossil fuels, as conversation surrounding climate change continues. As a part of the climate change conversation several commentators have cited Australia’s untapped renewable energy industry and our potential to produce mass energy from sources like solar, wind and hydro.

Of all renewables, hydroelectricity is the largest energy source, followed closely by wind power. However, research from The Australian Institute suggests solar power is the nation’s preferred future energy source.
Solar energy is typically generated by solar farms. A solar farm is a large scale installation where photovoltaic panels, referred to as solar panels, are used to harvest the sun’s power.

Solar power accounts for just 0.3 per cent of our power generation (Australian Bureau of Statistics), despite Australia having some of the best conditions in the world for producing solar energy. As the cost of gas begins to rise, experts predict solar will become an increasingly competitive and valuable energy source. It’s estimated that solar thermal energy could produce up to 60 per cent of Australia’s on grid electricity which would dramatically reduce our emissions.

As advances in technology and reductions in cost give rise to solar energy, it’s important for energy suppliers to understand their tax entitlements. Depreciation is one aspect of taxation that facilitates greater investment in renewable energy projects like solar farms and ultimately lowers costs for consumers.

The following table lists examples of plant and equipment assets found at the solar farm and highlights each asset’s original value at purchase. It also shows the first year and cumulative five year deductions available for each asset. The list of plant and equipment assets is not exhaustive and it’s likely there are several more assets of substantial depreciable worth to be deducted. 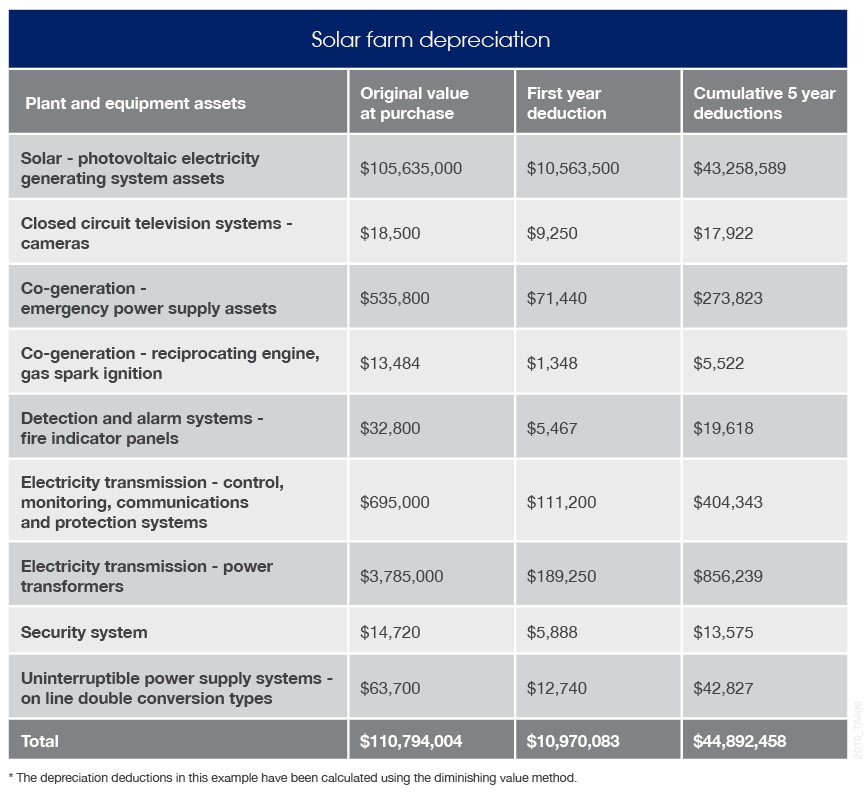 As the table shows, the owner of the solar farm is entitled to claim almost $11 million dollars in depreciation deductions in the first financial year alone. When looking at the cumulative five years, this figure rises to almost $45 million. The owner will be able to claim many more millions over the lifetime of the solar farm. The money saved through depreciation could be useful when considering further investment or development for the commercial operation.

A tax depreciation schedule is the best way to ensure you claim maximum deductions and get the biggest tax refund possible. A BMT Tax Depreciation Schedule covers all deductions available over the lifetime of a property and is 100 per cent tax deductible.

To learn more about property depreciation, Request a Quote or contact the expert team at BMT on 1300 728 726.