The countdown to the final episode of The Block, which will air the results of the 12th of November auction, has arrived.

As we wait to see which pair will take home the title of the best renovators, we took a look at some of the winning rooms delivered by the contestants throughout the season and point out some of the depreciable items which could entice investor buyers to place their bids as the auction hammer falls.

At the start of the season Julia and Sasha set the pace early, revealing a stunning master ensuite in which they spent a whopping $65,000.

The girls chose the theme of ‘Hollywood glamour’ throughout their apartment and this was demonstrated in their bathroom which Darren Palmer described as the “perfect blend between contemporary, classic and classy, with a touch of deco here and there.”

Shaynna Blaze loved the dark vanity cabinet and the black edging on the tiled inlets, but it was the $4,000 brass tapware and shower head which caught our eye.

Much of a bathroom contains fixed items which can be claimed as capital works deductions should an investor buyer choose to rent the apartment.

In addition to the tapware, capital works deductions can be claimed for the sink and cabinets in the vanity, the mirror, bath and tiles. Bathroom accessories used to style the apartment can also be depreciated by investors. 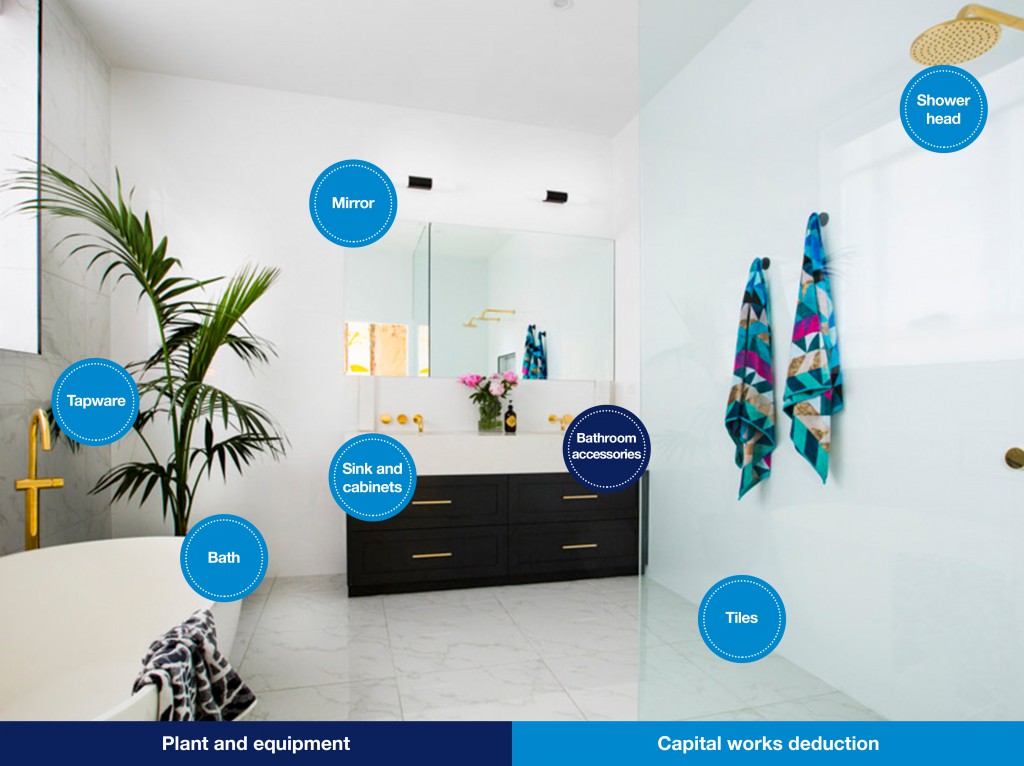 During week four Andy and Ben revealed a second guest bedroom which surprised the judges with an additional secret ensuite.

The bedroom featuring neutral greys in the linen, rug and carpet was also a hit with the judges. On the wall, a giant feature was installed which showed a map plan of Port Melbourne from the Melbourne and Metropolitan Board of Works.

Any of the beds and linen used throughout each of the contestants apartments will allow investors to claim plant and equipment depreciation, as would the rugs and carpets.

The black cupboards which give the room a hint of art deco that the judges hoped to see during the renovation of the historical building would allow investors to claim capital works deductions. 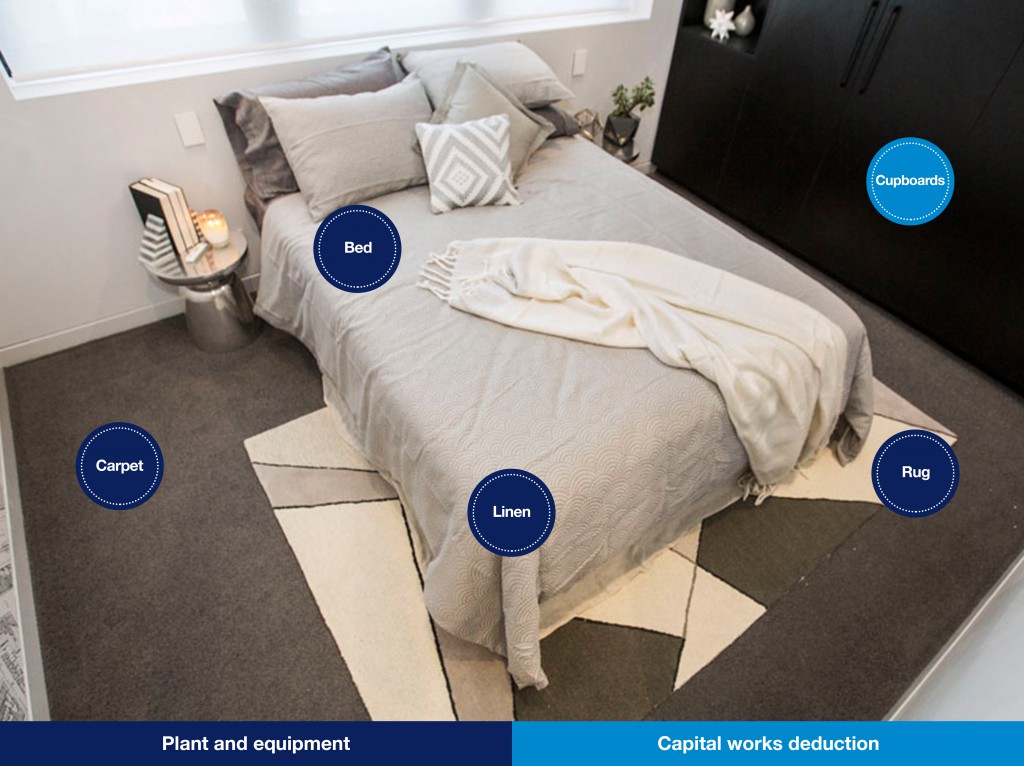 A wonderful choice of flooring, carefully selected rugs and the varied sofa and armchairs featured in Dan and Carlene’s apartment were enough to get a nod from the judges during week five.

While the win shocked Dan and Carlene after they had troubles earlier in the week with preparations to lay their tiles, Neale Whitaker said the couple took “the art deco theme and turned up the dial.”

Many of the furnishings in the lounge room including the leather arm chairs, the sofa, the curtains, lamp, rug and television will result in plant and equipment depreciation for an investor buyer of the apartment.

While capital works deductions can be claimed for the floor tiles installed, deductions would have been higher if the couple had managed to install the underfloor heating initially planned.

The judges criticised the couple for not following through with the heating with Darren Palmer saying “if you’re going to put tiles down, especially somewhere as cold as here, heat them.” 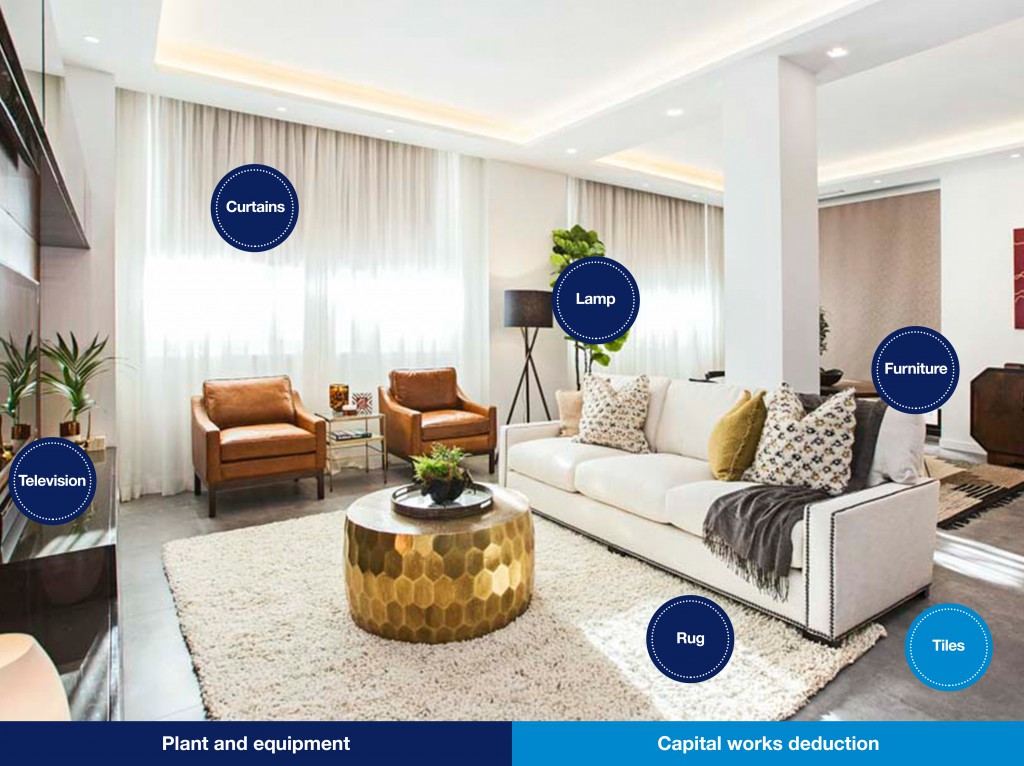 Will and Karlie’s kitchen

They say that kitchens help sell properties and without a doubt this season of The Block delivered some stunning examples.

While two teams received high scores from the judges, Will and Karlie’s kitchen was the one which caught our eye with the slick black tiles and polished concrete floors.

The tiles, tapware and polished concrete would entitle investors to capital works deductions, while plant and equipment assets such as the curtains, rangehood, stools, ducted air conditioning, oven and light fittings can also be claimed.

For those bidding on auction day this kitchen offers a lot for investors to consider. While Shaynna summed it up by saying “I don’t know where to look, the floor first, or do I look at the kitchen,” our suggestion for investors is to consider the fact that kitchens are often the room within an investment property that will offer the most substantial depreciation deductions. 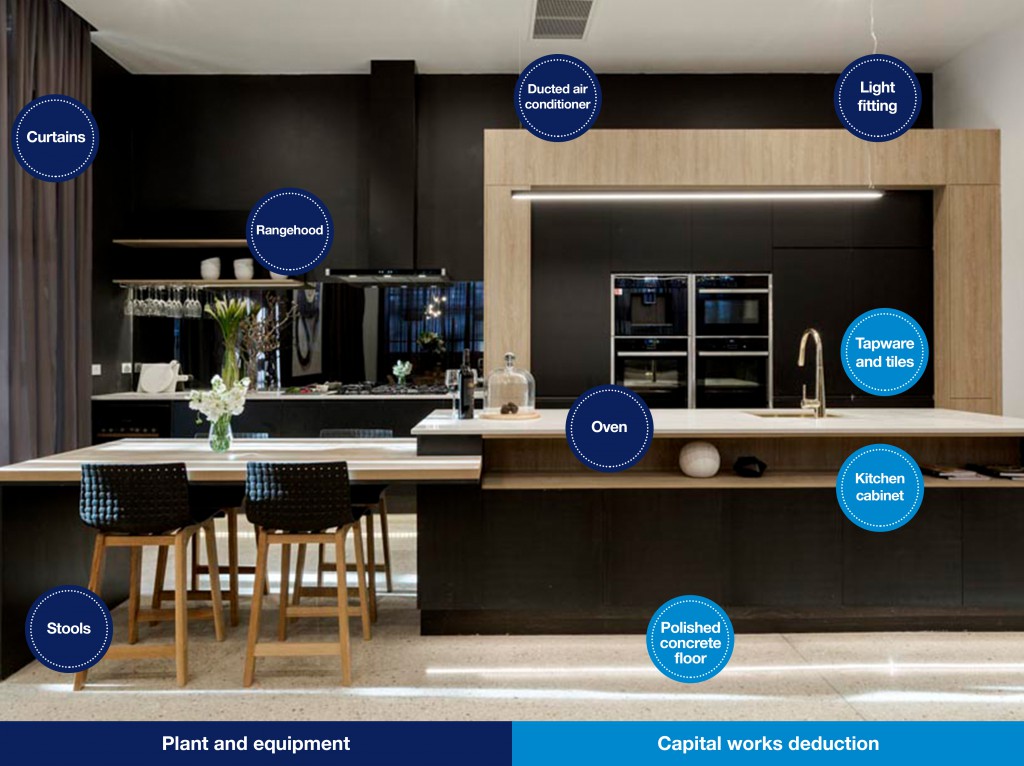 While Will and Karlie won the best kitchen, Chris and Kim’s penthouse apartment almost offers up two with the amazing BBQ, rangehood and bar fridge included in their outdoor alfresco area.

As with indoor items, outdoor areas offer a significant number of deductions for property investors.

In addition to rangehood, bar fridge and BBQ stove top, investors would be eligible to claim plant and equipment depreciation for the furniture and the inbuilt sprinkling system which waters the hanging plants.

Capital works deductions can be claimed for fixed items in the alfresco area such as the tiles, bench and cabinets.

Although Chris and Kim struggled with mixed feedback from the judges throughout the season, Neale said the pair saved “the best for last,” describing the alfresco as “absolutely sensational.” 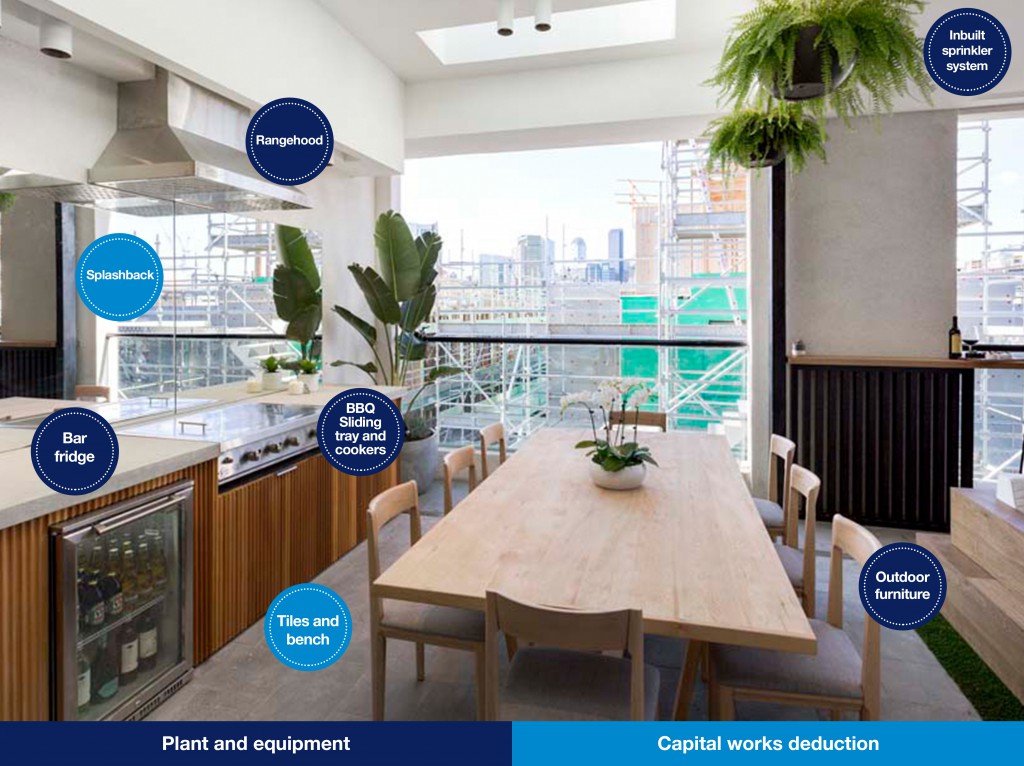 While each property offers up both positive and negative aspects in terms of styling and design, all five contestants have created apartments which provide additional value for investor buyers.

It will be interesting to see how many of the apartments are purchased by these buyers compared with owner occupiers on auction day.