What if Santa’s workshop was an investment property?

Santa’s workshop has the power at Christmas time to capture our imaginations and cast them to the snowy North Pole, where our minds bear witness to the source of the joyful magic of the holiday season.

Whilst the big, jolly, red guy is making his list and checking it twice, his playful elves are helping to build, test and wrap all those special toys and games in time for Santa to deliver around the world on Christmas Eve.

One such clever elf in Santa’s service, is Brad, the BMT Christmas elf. Brad the elf pointed out to Santa the tax depreciation deductions claimable in his toy making workshop. By claiming depreciation at tax time Santa discovered just how easily he could increase his cash flow. It was as simple as jumping online and requesting a quote from the BMT Tax Depreciation website.

After a visit to the North Pole by a BMT depreciation expert, Santa learnt that he is indeed eligible to claim all the wood working machinery and hand tools plus his work bench. He can also claim the light fittings and the ducted gas heating which is essential in the freezing, wintery climate of the North Pole.

Santa was surprised to learn that the structure of the Christmas toy workshop was also claimable as a capital works deduction.

As the example below shows, Santa could claim $17,366 in the first full financial year’s depreciation deductions. 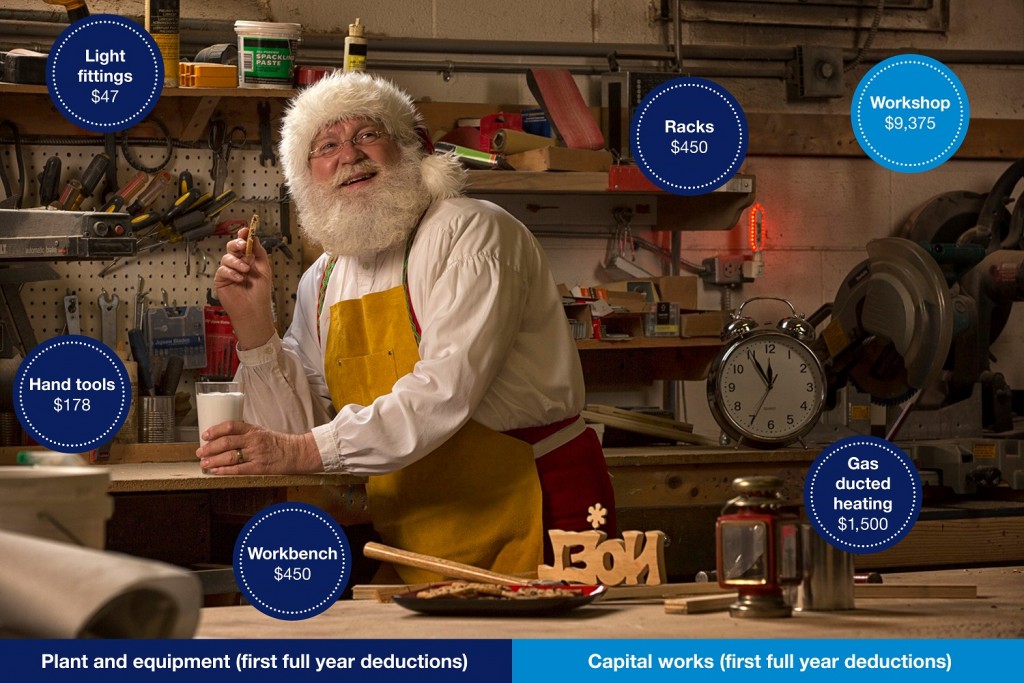 Santa only needs to get a depreciation schedule produced once as it lasts 40 years and will outline the depreciation deductions for the lifetime of his workshop. The cost of the report itself is also 100 per cent tax deductible.

Like Santa, if you have not previously claimed depreciation, your accountant may be able to backdate your claim for the previous two years, so you can recoup some additional cash back on previous years’ tax returns.

With more than twenty years of experience, BMT Tax Depreciation’s specialist staff conduct physical property inspections to ensure that all claimable assets are included in each tax depreciation schedule.

BMT would like to take this opportunity to wish everyone a very Merry Christmas and a safe holiday season.