Could this regional city be the next property hotspot?

A high proportion of property investors often overlook regional locations which offer great potential. Right now, one of the strongest property markets in Australia is the inland regional Victorian city of Mildura.

Mildura’s 7.8 per cent increase in median house price over the last twelve months is superior to all Australian capital cities. Only Hobart, Canberra and Melbourne have produced a higher rate of capital growth over the last three years. 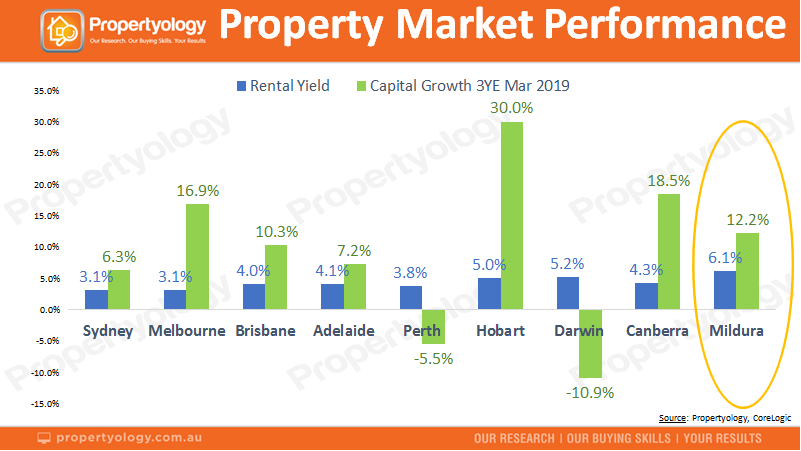 You’ll get change from $300,000 for a good quality house in Mildura and the 6.1 per cent median rental yield, regardless of the size of your deposit, puts a standard investment property in cash flow positive territory.

While several capital cities are currently feeling the pinch from housing over-supply, Mildura’s vacancy rate of 0.6 per cent is reflective of one of the tightest rental markets in the country.

As for employment opportunities, the 6.9 per cent increase in job advertisements over the year ending May 2019 is higher than six out of eight capital cities.

There’s no such thing as a ‘perfect’ property market however, as you’ll see throughout this Mildura Property Market Research Report, this location certainly ticks the right boxes.

The trend line in the below chart confirms how incredibly consistent the market has been for just shy of three decades, with the average annual growth over the period being 4.5 per cent. 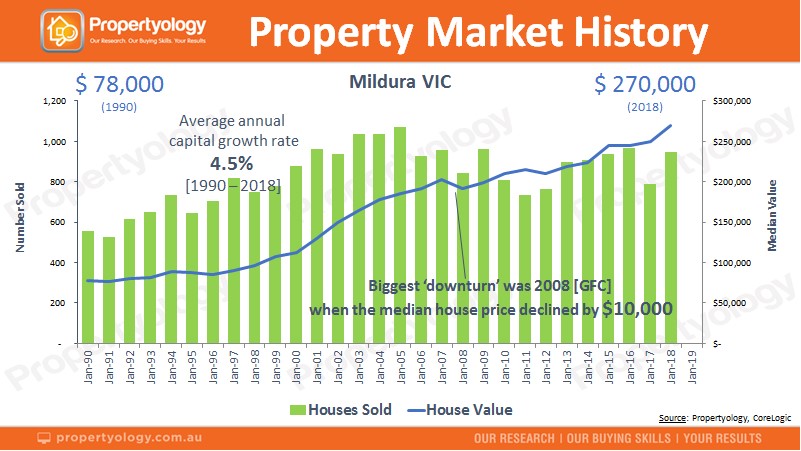 The largest property market downturn ever experienced in Mildura was in 2008 (the year of the GFC) when the median house price declined by just $10,000. Contrast this against the $225,000 decline in middle-ring Sydney over the last two years and one can only hope that property investors are now starting to re-evaluate Mildura’s potential.

Over the most recent five years (ending March 2019), Mildura’s 25.6 per cent price growth is on par with Canberra and superior to Brisbane, Perth, Adelaide and Darwin.

As for rents, according to CoreLogic, Mildura’s current median house rent is $320 per week. Rents have increased by 18.5 per cent over the last five years and 6.7 per cent over the twelve months ending March 2019.

Located on the Victorian side of the Murray River, Mildura is the largest settlement in the Sunraysia region. Mildura is an important service centre for dozens of smaller country towns within a 100-kilometre radius.

During 2017-18 the inland city had a population growth rate of 0.8 per cent, equal to Adelaide and driven largely by overseas migration. The demand from overseas migration is led by skilled labour, particularly to support the region’s agriculture productivity.

Based on Mildura’s average annual population growth over the last five years (477) and its average household size of 2.4 people, the base-level demand for extra housing in Mildura is 199 dwellings per year.

According to Australian Bureau of Statistics data, an average of 293 new dwellings have been approved in Mildura over the last five years. On face value, the data suggests recent supply should have been sufficient for recent demand, but the reality says otherwise. 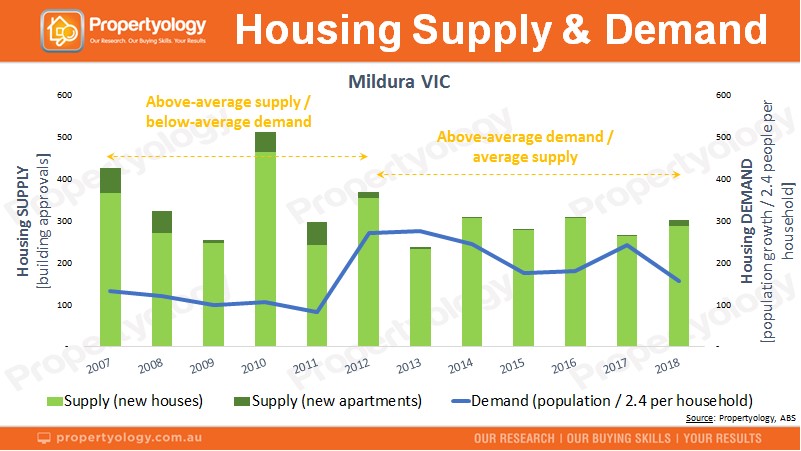 Mildura’s dwelling stock increased by 428 between the Census periods – enough for an increased population of 1,027 people. However, ABS data shows the actual population growth across this period was 2,742 (1,715 more than supply accommodated for).

For much of the last decade, roughly seventy residential dwellings were recorded as ‘vacant’, or a vacancy rate of just shy of 2 per cent. All considered, Mildura’s rental stock would benefit from an additional forty to fifty dwellings.

Mildura is a shining example of a regional location that continues to produce solid results.