This time last year, Sydney and Melbourne were in the middle of a property market boom and every property market analyst in Australia was predicted that those same cities would again finish top-of-the- table in 2017. Everyone except Propertyology, that is – we were the one black sheep who made the bold prediction that Hobart would be Australia’s best-performed capital city for 2017 [refer here]. Similarly, we also said that several regional locations would perform well. Now that the jury is out, let’s review what did happen in 2017 and see what our crystal ball says for the year ahead.

Who were the winners and losers in Australian property markets during 2017?

Melbourne (12 per cent) and Sydney (10 per cent) produced their fifth consecutive year of strong growth. Canberra (7 per cent) was the surprise packet, while Adelaide was also steady. On the other hand, Perth and Darwin had their third year of declining prices.

Brisbane (3 per cent) was again underwhelming. Australia’s third biggest city has only seen 35 per cent compound growth over the nine years since the onset of the GFC while Sydney, Melbourne and Hobart produced that in just two to three years.

Australia’s most affordable capital city, Hobart, has been the clear stand out in 2017 with 14.3 per cent growth for the twelve months ending September 2017. Given that Hobart also has the best rental yields in the country, the total return (capital growth + yield) is 5 per cent more than Melbourne and 7 per cent more than Sydney.

With three months of data yet to unfold to round out the 2017 calendar year, we believe Hobart will end 2017 with at least 16 per cent price growth. That will make it the largest annual increase by any capital city in ten years. 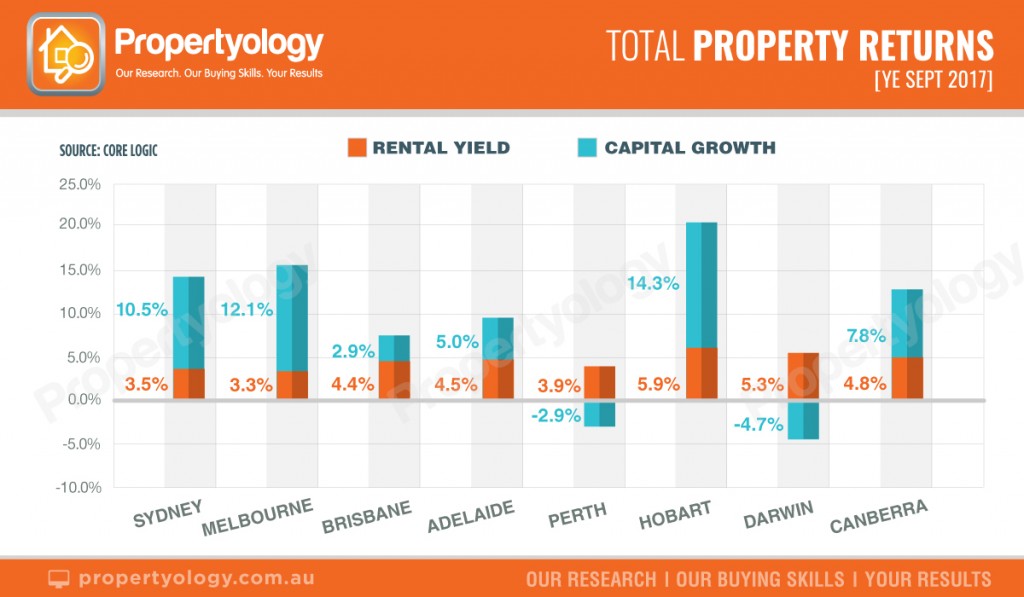 What is driving the Hobart property market?

As predicted by Propertyology when we began investing in Hobart in mid-2014, the Tasmanian economy has been the most improved in Australia by a long streak and, as usually happens, its property market followed suit. The Apple Isle has some of the best agricultural products and tourism experiences in the world; Hobart is also a beautiful university city. But it’s only recently that people outside of Tasmania have grown to appreciate this. Chinese President, Xi Jinping, made a special visit to Hobart (and only Hobart) in 2014 to foster business relationships and now the secret of Tasmania is well and truly out.

The rate of employment growth in Hobart over the last year was four times the national average and double the next best capital city. The economy doesn’t appear to be slowing down either; job advertisements have a very steep trajectory. Records keep being broken in retail trade (the cash registers are ringing loud) and visitor volumes (domestic and international). The strong economy and high consumer confidence means that locals are keen to transact in property and there certainly aren’t any affordability barriers.

How did regional Australia perform in 2017?

Newcastle (12.7 per cent) and Wollongong (15.5 per cent) again benefitted from the Sydney knock-on effect. Lifestyle markets like Byron Bay (14.1 per cent) and Port Macquarie (9.3 per cent) also performed very well. Lesser-known New South Wales locations such as Maitland (6.2 per cent), Bathurst (6.5 per cent), Dubbo (5.3 per cent), and Orange (4.7 per cent) performed better than four out eight capital cities. The tomato capital of Australia, Guyra, had a stellar year with 16 per cent growth.

In Victoria, Geelong (7.9 per cent) had another good year and Ballarat (4.2 per cent) was solid. Vindicating Propertyology’s belief from a couple of years ago that parts of regional Australia with specific agricultural products and locally-based food manufacturing businesses would do well, Colac was a stand out with 19.6 per cent price growth.

The underrated rural township of Goondiwindi was Queensland’s star performer last year with 20 per cent price growth. Gold Coast (7.8 per cent), Sunshine Coast (5.7 per cent), and Beaudesert (5.5 per cent) again performed better than the state’s capital. While major regional service centres such as Townsville, Rockhampton, Gladstone and Mackay saw price declines, they all produced an increase in sale volumes and there are a number of positive things soon to impact their respective economies which will flow through to property prices.

A 6 per cent increase in transaction volumes in the industrial township of Port Augusta forced the median house price up by 13.2 per cent over the last twelve months.

In Western Australia, the lifestyle markets of Broome and Busselton were price growth neutral over the last year while the performance of Albany and Geraldton was in line with Greater-Perth’s, producing a mild decline and showing signs of stabilising. Port Hedland (-33 per cent) and Karratha (-22.6 per cent) had big falls.

Launceston (-1.2 per cent), Burnie (2 per cent), and Devonport (2.9 per cent) were yet to show any property price growth resulting from Tasmania’s improved economy although sales volumes have increased and days-on-market are reducing.

How will Sydney and Melbourne perform in 2018?

2017 was the fifth year of Sydney and Melbourne’s growth cycle and, even without APRA’s recent credit-tightening intervention, logic would suggest that the property markets of Australia’s two most expensive cities are due to moderate.

While there are no immediate signs of Sydney’s economy slowing down, auction clearance rates and sale volumes suggest that Sydney’s property market had flattened right out by the end of 2017. Property prices appear to be well out of reach of most of the buying public and local sentiment has been dampened by suggestions from some economists that prices could fall by as much as 10 per cent. There are real risks with Sydney’s market however, all things being equal, Propertyology’s view is that Sydney property prices are likely to be largely flat for some years. Our analysis of building approval data is such that we see potential for unit prices to ease in some parts of Sydney.

Melbourne ended 2017 stronger than Sydney but it’s noted that its rate of growth across this cycle hasn’t been as strong as Sydney. For us, 2018 was always going to be the year that would determine the impact of tens of thousands of job losses linked to the closure of Australia’s car manufacturing industry. Stronger than expected population growth combined with recent improvements to Victoria’s first home grant are cause for Propertyology to be less bearish than our initial assessment. That said, there’s every chance that Melbourne’s market will be flat by the mid-2018.

Which capital city will be Australia’s best-performed in 2018?

Propertyology predicts that Hobart will be the run-away leading capital city property market in 2018. Our analysis of a range of metrics suggest that, all things being equal, price growth in the mid-high teens is probable. Metropolitan-Hobart may even push through the 20 per cent milestone, a feat last achieved by a capital city way back in 2007 (Darwin 22.2 per cent). 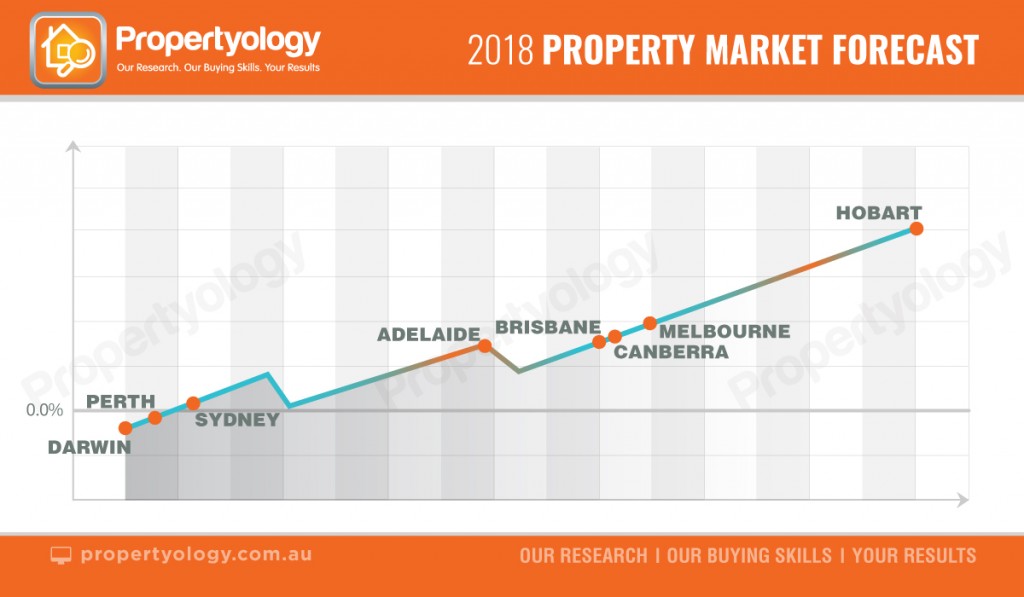 How will the other capital cities perform in 2018?

Propertyology believes that Hobart is the only capital city likely to produce double-digit price growth in 2018. That said, five out of eight capital cities have a better outlook for the next three years than the last three years.

Adelaide, Brisbane, Perth and Darwin have all been underwhelming since 2010. Of these, Adelaide and Brisbane are the most likely to next commence their growth cycles although we are still waiting for tangible indicators for that to play out.

There is some suggestion that Perth’s economy has finally stabilised although the declining interstate migration remains a concern. Propertyology’s view is that Perth still has very high volumes of rental and resale stock for price growth to reoccur – an improvement to neutral territory (perhaps for a prolonged period) is our forecast.

Darwin’s one and only major infrastructure project, the $40 billion Ichthys LNG plant, is scheduled for completion in early-2018 and the cupboard is currently bare for new infrastructure projects to replace the jobs that peaked at 8,000 in 2016. We believe that a 4th year of property price falls will occur in 2018.

By the end of 2018, Propertyology believes that there will be little difference in annual property price growth between Adelaide, Brisbane, Canberra and Melbourne. Whichever of these cities finishes the year in second place is still likely to be a long way behind Hobart!

What about regional Australia?

Without exception, history has taught us that there’s several high-performers among regional cities every year and 2018 will be no exception. In fact, Propertyology believes that the best opportunities for investors over the next few years will be found in regional Australia, not capital cities.

Several drivers which should have a positive influence on regional property markets include changing agriculture, increased tourism and a stabilising mining sector.

Propertyology is a national property market researcher and buyer’s agency. The multi-award-winning firm’s success includes being a finalist in the 2017 Telstra Business Awards and 2016 winner of Small Residential Agency of the Year in REIQ Awards For Excellence. Managing Director Simon Pressley is a REIA Hall Of Fame Inductee and a three-time winner of the REIA and REIQ Buyers Agent of the Year award.