This month, the government released draft legislation regarding the proposed changes to plant and equipment depreciation as announced in the May federal budget.

The draft outlined further details around a property investor’s eligibility to claim depreciation and provided a range of scenarios to be aware of should this legislation pass.

In a positive move, the government provided the public with an opportunity to have their say on the new measures. A public consultation period, which was open until the 10th of August 2017, has now closed.

While these measures are yet to be legislated, we have taken a proactive approach in reviewing how these intended changes could impact investors. Following is an in-depth look at the possible outcomes.

In essence, the proposed new law reduces the amount an investor can deduct for a previously used depreciating asset for the purpose of gaining or producing assessable income.

Should the proposed legislation be passed, this means that residential property investors won’t be able to claim depreciation for plant and equipment assets found in second-hand properties in which contracts exchanged after 7:30pm on the 9th of May 2017.

How will the changes affect an investor’s cash return?

The following scenario compares the cash return an investor will receive for a three year old house purchased for $600,000 both before and after the proposed new measures. 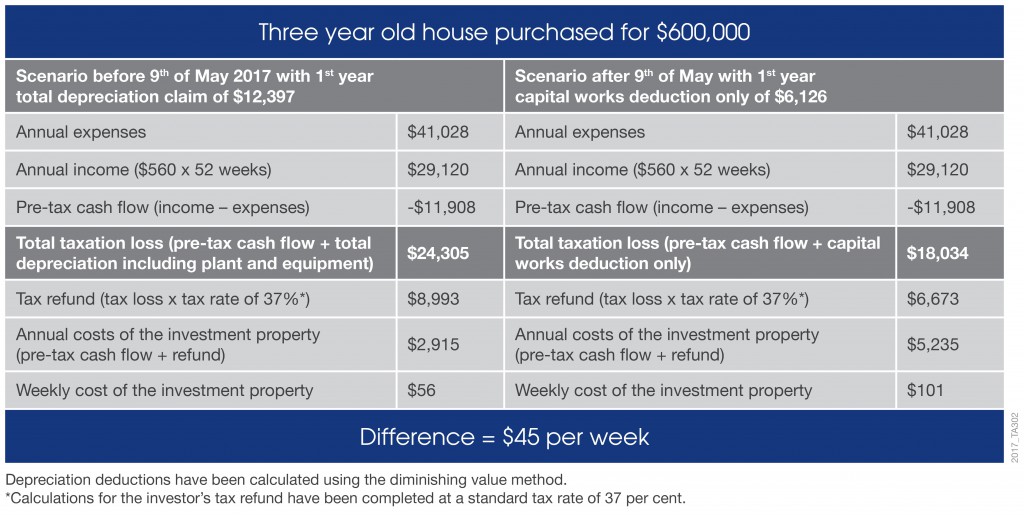 In scenario one, the owner is able to claim a total depreciation claim of $12,397 for both capital works deductions and plant and equipment depreciation.

Using depreciation, this investor will experience a weekly cost of $56 per week to hold the property.

In the second scenario, as the owner exchanged contracts on the property after 7:30pm on the 9th of May 2017, they are only able to claim $6,126 in capital works deductions and will be unable to claim $6,271 in plant and equipment deductions.

As you can see, the proposed changes will limit the depreciation deductions available to property investors, which will lead to a cash flow reduction each year.

BMT believes that while generally the integrity measure has merit, the proposed changes go much further than what is necessary to deliver on the Government’s intention of stopping subsequent owners from claiming deductions in excess of an assets value. The approach proposed in the draft legislation treats residential property investors differently by extinguishing a property investor’s ability to claim a deductions based upon a transaction.

Property investors who would like more information can speak with one of our expert staff by contacting their local office.

About the author
BMT is a Quantity Surveying company who specialise in tax depreciation with a personalised approach to every tax depreciation schedule prepared for investment, commercial and rental properties.
Social share
3 Comments